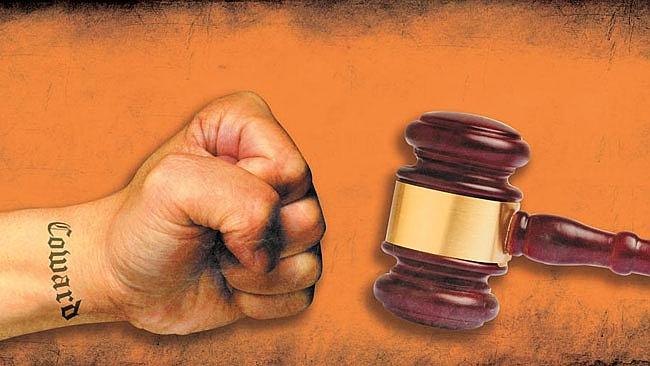 Melbourne QC Peter Faris believes getting juries to find a conviction for manslaughter might be a bridge too far. Source: HeraldSun

WHEN Daniel Singleton punched Nathan Alsop, his victim did not see it coming. Alsop fell to the ground unconscious and died.

What happened next, as the police and judiciary dealt with the killer, devastated the Alsop family and disappointed a community.

But you could see that coming a mile off.

Many of the facts around the case of Daniel Singleton and Nathan Alsop form almost a blueprint of the one-punch death.

They both played football – indeed, they were teammates at the East Geelong Football club. King-hit heroes often play football.

The men had been drinking to celebrate their team’s grand final win at the end of the 2009 season. Alsop was drunk and so was Singleton, whom police ruled unfit to be interviewed.

The nexus between alcohol and violence hardly needs explaining.

Singleton was charged with manslaughter, but juries can be reluctant to find a conviction for manslaughter.

And, predictably, Singleton’s lawyers argued that their client could not have known that a single punch could kill. He doesn’t read newspapers, then.

As the jury of eight men and four women filed back into court to give their decision to Supreme Court Justice Katharine Williams, Singleton’s breathing deepened and quickened and I’m not surprised; you can get 20 years for manslaughter. But had he ever read a newspaper, Singleton might have known that nobody ever does.

On cue, the foreman was asked the jury’s decision and replied: “Not guilty.”

The jury had clearly accepted that Singleton could not have known he might kill Alsop with one punch.

But I thought every Victorian had come to understand that after the death 10 years ago of David Hookes outside the Beaconsfield Hotel in St Kilda.

Hookes’ killer, Zdravko Micevic, followed the former cricketer down the street and, in disputed circumstances, punched him once.

Hookes fell unconscious, hitting his head on the road and died the following day.

A jury similarly found the pub bouncer Micevic, a trained champion boxer, not guilty of manslaughter.

Well-known Melbourne QC Peter Faris, a former chairman of the National Crime Authority, believes getting juries to find a conviction for manslaughter might be a bridge too far.

He believes we need a new crime as a stepping stone between murder, manslaughter and the assault charges that seem inadequate for incidents in which a person has lost their life and which will seldom satisfy victims’ families.

The wives and families of Hookes and Alsop were devastated by the juries’ decisions; a mental trauma that itself can register as an injury.

“There is manslaughter by unlawful and dangerous act, which in this case is a punch,” Faris said. “That’s very difficult because the person is not necessarily killed by the punch.”

“Murder and manslaughter, in my opinion, are the sort of offences that juries are not going to convict on for a single punch.”

So Faris wants a new law: Causing death by assault.

It would state that “a person who, without lawful excuse, assaults another person and that assault (directly or indirectly) causes the death of that person, is guilty of an indictable offence”.

Faris is calling for a maximum jail sentence of 20 years for the crime, with a fixed, non-parole period of 10 years.

“Publicise it well and these thugs will know that if they hit and kill someone, they’ll go to jail for at least 10 years,” Faris said.

The NSW Premier, Barry O’Farrell, has responded to the shocking one-punch deaths of two Sydney 18-year-olds – but particularly the New Year’s Eve punch on Daniel Christie which ended with his death – with a mixed bag of stricter alcohol sales laws and tougher sentencing.

Sentencing, and the judiciary’s lenience with perpetrators of serious crimes – particularly in Victoria – is one thing. Some of his announcements about drinking hours may prove popular, but also miss the point. You can shut down venues at 3am if you want, but Daniel Christie was attacked on the street at 9pm.

The national outcry over Daniel’s tragedy appears also to have forced the hand of the NSW Police to charge Daniel’s assailant with murder.

“They’ve charged this fellow in Sydney with murder. Well, good luck to them,” Faris said.

“It’s going to have to be reckless murder. They haven’t got a hope in hell of proving he intended to kill him.”

Murder might have a good headline, but for justice to be done we are going to need a simple change to the law.

Causing death by assault sounds simple. And spot on.

Entering a living hell from just one punch